In my opinion, every philosophy student should be held responsible for an intimate acquaintance with the Game of Life. It should be considered an essential tool in every thought-experimenter’s kit, a prodigiously versatile generator of philosophically important examples and thought experiments of admirable clarity and vividness.

Conway’s Game of Life is not a game in the conventional sense. Rather, the Game of Life is a computer simulation that takes place on a two-dimensional square grid. Each of the cells in the square grid can be in one of two states: a cell can either be alive, or a cell can be dead. The precise rules of the game need not concern us here. The main point of the Game of Life is that, from its very simple rules, a rich diversity of complex behavior can be simulated.

However, as valid as this argument may be, the third and fourth premises are far from obvious, so if you are a non-AI proponent, you can simply do a modus tollens and argue as follows: 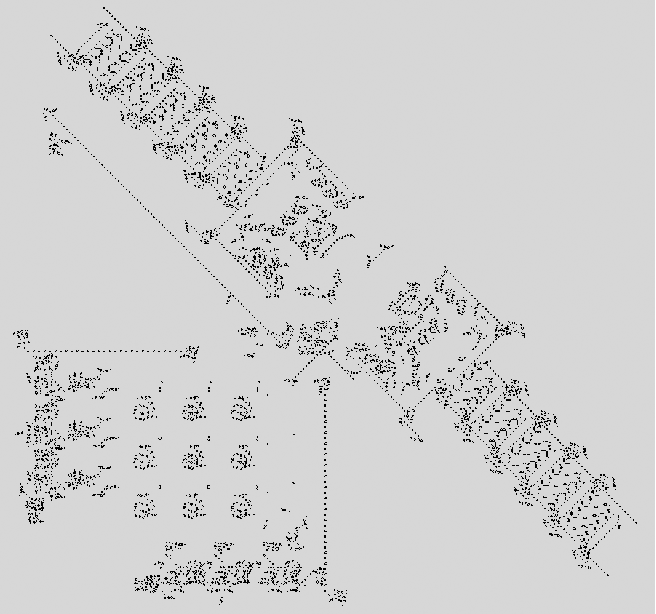 To explain why I think premise (3′) is true, I’m not going to question an important assumption Dennett makes, that something must be able to change its internal state in response to its environment if it is to possess cognitive states that mentally represent its environment. By granting Dennett this assumption, we can use it to argue why the Game of Life does not possess cognitive states. I’m inclined to think there is a lot more to an entity having cognitive states than its ability to change its internal state in response to its environment. Nevertheless, if we grant that Dennett is correct in this thesis and suppose the existence of entities in the Game of Life possessing cognitive states, then we should be able to identify these entities.

The first place to look for such entities would be at the single cell level. If one looks at a single cell as the Game of Life runs its course, at various times we would see it become live, and at other times we would see it die. We could, therefore, ask, in what ways can a single cell respond to its environment? Well, there are 256 possible combinations of live and dead cells immediately surrounding a single cell, though the cell is only able to differentiate between three different types of combination. Now, one would be hard-pressed to defend the claim that even something that could distinguish between only 256 possible types of environmental conditions has cognitive states. Therefore, a fortiori, something that can distinguish between only three possible environmental conditions is not going to have cognitive states.

If the single cells in the Game of Life do not have cognitive states, what else might have them? Maybe a particular system of cells has a cognitive state. However, for such a claim to be intelligible, we need to make sense of what it means for something to be a system possessing internal states.

The trouble is, Dennett is rather vague on what he means by a system. What determines when something belongs to a system and when it doesn’t? Are we to think that every subset of things in the universe is a system, and if so, does this simply reflect our own subjective thoughts about the universe, or does it reflect our recognition of a higher level ontology possessed by the systems themselves? Dennett adopts the latter view.

Dennett’s ontological claim raises the obvious question: Why shouldn’t we apply Occam’s razor and refrain from positing the existence of more entities than are required to account for a given state of affairs? With the Game of Life, all you need to do is specify the states of all the individual cells and nothing further is required to explain what’s going on.

Here is a longer version of this essay. Fr. Robert Verrill is an English Dominican Friar who was ordained to the priesthood in 2012. Having completed a master’s in Philosophy at the Dominican School of Philosophy and Theology in Berkeley, California, he has been working on his doctorate in philosophy at Baylor University in Waco, Texas, since 2016. Before joining the Dominican Order, Robert studied mathematics at Cambridge in England and completed a doctorate in operator algebras and conformal field theory. He then worked in the sonar industry for several years as a systems/software engineer. He joined the Dominicans in 2006 and completed a Sacred Theology Baccalaureate at Blackfriars, Oxford in 2012. Fr. Robert loves the philosophy and theology of St. Thomas Aquinas and is particularly interested in trying to understand modern physics from a Thomistic perspective.

See also: AI That Can Read Minds? Deconstructing AI Hype The source for the claims seems to be a 2018 journal paper, “Real-time classification of auditory sentences using evoked cortical activity in humans.” The carefully described results are indeed significant but what the Daily Mail article didn’t tell you sheds a rather different light on the AI mind reader. (Robert J. Marks)